Harlan’s Red-tailed Hawk on the Breeding Grounds in Alaska

This post details my encounters and notes of Harlan’s Red-tailed Hawks in Alaska during the early summer of 2016. The post is separated into two parts, individuals I encountered while conducting the Alaska Land Bird Monitoring Survey in the remote western interior, and individuals I’ve encountered in the Anchorage area.

From the Innoko National Wildlife Refuge:

I just returned to Anchorage from two weeks of bird surveys in the interior of Alaska, conducting the Alaska Landlord Monitoring Survey for the Boreal Partners in Flight. These surveys entailed travel to three remote national wildlife refuges; Innoko NWR, Nowitna NWR, and Koyukuk NWR. The aim of myself and my friend Nick Hajdukovich was to conduct point counts on refuge land. Our travel consisted of float plane transport to each refuge. Once in the Innoko, we logged 200 miles of river travel on the Innoko River to and from our two survey plots, which provided me with great exposure to untouched Alaskan wilderness. Along the way I happened upon a few individuals of perhaps my favorite bird taxon, the harlani subspecies of the Red-tailed Hawk.

The first birds I encountered on the Innoko River happened to be a nesting pair. Their nest was situated on a partially fallen White Spruce that extended over the open river. As we approached the nest we cut the motor and drifted directly beneath the brooding female. At 200 m from the nest a light morph bird, the male, took flight from a nearby tree and began vocalizing and stooping on our boat (Photo 1, 3). As we floated by, I took the opportunity to document the situation.

It was excellent to observe the defensive behavior. Equally excellent was the light morph plumage of the male, and his silver/white tail with hints of red near the tip (Photo 3). As we passed the dark morph female on the nest (Photo 4), we could see her heavily banded tail, dark and red throughout (Photo 5). The variability in tail pattern in these birds interests me greatly, and it was excellent to see this dark bird with a near wholly red tail.

The female was sitting in the nest, along with one nestling which appeared to be around 15-20 days old. The nestling was panting in the intense Alaskan sun. The temperature was a balmy 70 degrees Fahrenheit, very warm for Alaska. We drifted on, got our fill of photos and satisfying looks, started up the 5 HP motor, and continued our trip. 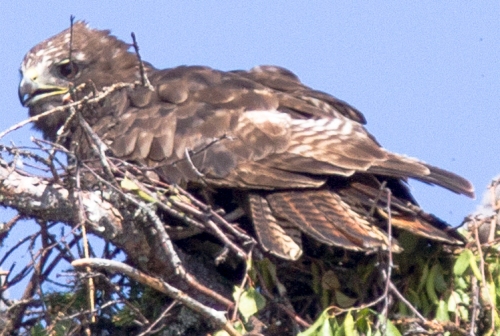 Throughout our trip we saw a few other adults, all dark morphs that one would consider “typical” harlan’s with whitish and silver tails, white streaked bibs, etc. The birds were uncooperative for photography, except for two individuals that happened to be my most sought after group of this taxon, second year birds midway through their pre-basic molt (Photo 6). I included a photo of one of the individuals, as they were quite similar in appearance and at the same stage in their molt.

The degree of molt which these young birds undergoing is worth noting, as compared to all adults that I’ve seen. All adults, presumably breeding, are limited in the extent of their feather replacement. The two Second-year birds that I’ve photographed are molting heavily, as you can see in photo 6. This speaks to the energetic requirements of both molt and the reproductive effort, and the trade-off in allotment between both, something of which I’ve noted before in Gyrfalcons (find it HERE).

Overall the time spent in the western interior was grossly fruitful in my exposure to Harlan’s alone.

From the Anchorage area:

Something interesting is happening in Anchorage. Although I’ve seen plenty of birds in the region that fit what we call the “typical” Harlan’s (Dark morph, light bib, silver or white tail, mottled flight feathers, etc.), I’ve found two individuals, a pair, that are worth documenting. It’s important to note that I’ve been working in a fairly restricted area on the U.S. Air Force base at the north end of the city. I haven’t been able to cover much area throughout the valley, but much of my assumptions about other Red-tailed Hawk in this region come from observations at Gunsight Mountain Hawkwatch.

The first bird is a light morph female that my friend Laura showed me (Photo 7.). Although it has qualities typical for Harlan’s such as a mottled tail with silver and white tones amidst red, and globular belly markings, it also possesses traits reminiscent of other subspecies such as B. j. abieticola (Northern). Most notable is the barring throughout the wing lining, and on the belly. Also notable is the regular and distinct barring in the flight feathers. The question arises whether this bird’s phenotype is an infrequent but regular occurrence in the harlani population, or a result of integradation somewhere in its recent lineage? Although the area is an intergrade zone for many other species, I’m fully comfortable saying that I don’t know, nor do I want to suggest one over the other.  The most exciting part is not knowing, and realizing there is a frontier to explore in our understanding of this species.

The second interesting bird from the area is perhaps more exciting (Photo 8). It shows no indication that it belongs to the subspecies harlani. It resembles a dark morph calurus, with some unique contrasting qualities to the auxiliaries and undertail. I’m not sure what subspecies this bird is, but if I were to guess I’d say this bird fits with the Northern population (abieticola), suggesting that this subspecies is polymorphic. Regardless, This bird along with observations at Gunshight Mountain hawk watch support that the Anchorage area and Matsu Valley are an intergrade zone, as is the case with many other species. I think there remains much to learn about the biogeography of Red-tailed Hawks, especially as it pertains to this small area of Alaska.

I was surprised the first time I saw the proximity of nesting Rough-legged Hawk and Gyrfalcon. It was my first summer in Alaska. I was along the Dalton Highway peering through a scope at an incubating white Gyrfalcon. Only 100 meters down the cliffside was an incubating Rough-legged Hawk. Now that I’ve gained an in depth experience with cliff nesting birds of the Arctic, I see why these birds tolerate one another. There simply aren’t enough locations to be choosy.

These eyes were watching me as I pulled out one of my Gyrfalcon nest cameras the other day. This is on the extreme end of Gyrfalcon – Rough-legged Hawk nest proximity. These nests are only about 10 meters apart, and given that these young Roughies are about to fledge, they will both be successful. Almost every cliff I’ve worked in this summer has had a nesting Rough-legged Hawk pair. Some cliffs have had two, along with nesting Raven and Cackling Goose (yes, they nest in cliff nests often). Real estate is limited, so all suitable sites are usually occupied given enough food in the area.

Rough-legged Hawks are a favorite. I gained a familiarity with them during past winters in Utah, and it was always a dream of mine to see them on their breeding grounds. Each time I’m around a nest, I remember my current place and business in life, something that is not to be taken for granted. I’m living a personal dream, and I’m happy.

Peculiar Plumage of the Harlan’s Hawk 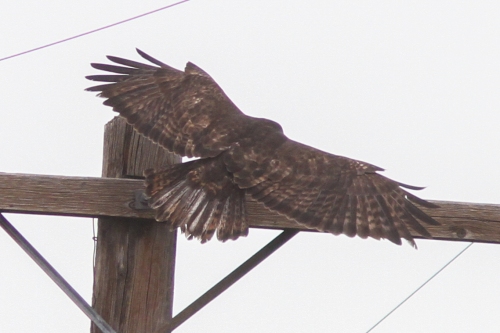 I found this interesting Harlan’s Hawk today in Hagerman, Idaho. It’s overall plumage left me thinking about Harlan’s ID. I’ve heard many people describe the “distinguishing” characteristics of the Harlan’s Hawk, but I’m always left confused as most of the Harlan’s I’ve seen don’t quite fit the mold they describe. I only know of a handful of people that can properly articulate why a bird is a Harlan’s, or not. In fact, I don’t include myself in that small list. I can recognize the subspecies, but putting that recognition into words is challenging. I believe this is due to the extreme variation in these hawks.

The white lores and flecking against a dark background on this bird are the only part of the body plumage that tips the filter for Harlan’s. It is not the deep black that everyone describes for the subspecies, nor is it highly contrasting. To be clear, this bird is very dark, but I’ve seen many Calurus that are highly melanistic, with deep dark brown bodies, even with light markings on the breast not unlike this bird. Many of the Harlan’s in Alaska and the Yukon Territory that I saw this past summer were soft brown, not at all high contrasting in plumage. This variability causes some confusion. So what makes a Harlan’s? As with all bird Identification, the ability to recognize a bird comes with study, exposure, and the overall impression of the bird. I have always compared bird identification to facial recognition, where multiple factors contribute to a recognizable image, without any cognizant processing. I leave the breakdown of what specific factors contribute to Harlan’s identification to the true experts, like J. Liguori. 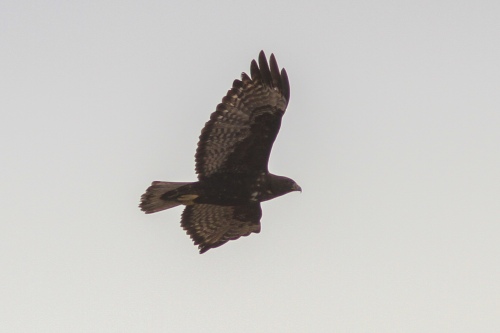 At times, there are single clinching factors that seal the deal in bird ID. For the Harlan’s, it is the iconic tail, the one mysterious trait that causes we the birder so much awe and admiration. But, I’ve seen Harlan’s with red, banded tails. Most of the birds I saw in the north last summer had extensive red in the tail. The Harlan’s tail can often be misleading. This fact, coupled with the variation in body plumage leads to the point of considering every bird as a whole.

The bizarre tail of this bird is fascinating. The central feathers are half ghostly silver, and half solid dark. The others are irregularly banded and spotted against a background of soft reddish tones reminiscent of its specific designation. After encountering this bird, I’m left with one question: Are any two Harlan’s alike? 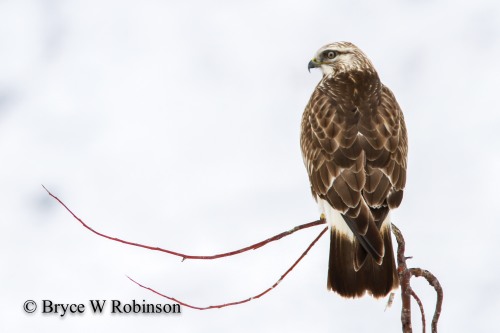 I haven’t been taking photos of raptors lately. I think I need to devote my next free day to hitting the open western road, solely in search of raptors.