The Next Adventure- Eagle Surveys in the West Desert of Utah

After a weeks respite, I have returned to field work. Now that the migration season is over, my work has refocused to wintering Golden Eagles in the west desert of Utah. I am charged with cataloging the presence of eagles across the vast landscapes. This task is quite heavy, as I travel alone throughout the vast lands alone, with only my own eyes to spot the birds. Luckily, these birds are large and dark. Thus far, they have not been too difficult to discern from the landscape. I have picked out a few birds perched high on rock faces.

In only two days of surveying, I have already found more than a dozen eagles. I have been blessed with a few close encounters, one of which was an eagle perched atop a decaying tree trunk, deep in the no-mans-land. Basking in the evening sun, the large eagle sat in seeming comfort. The bird was, no doubt, enjoying the warmth of the setting sun, as was I. Of course my camera was ready to capture the encounter. I came away with a few photos that I enjoy immensely.

Upon discovering this beautiful golden bird, I was taken aback by the overall impression the bird gave at a distance. Golden Eagles are unmistakable. They are long bodied creatures, and look very unlike the stocky appearance of a perched Buteo. Still, what I noticed was the shape of the head of this bird. Usually, the eagle looks sleek. This bird was fluffed and ruffled, likely warming itself. The feathers on the head of the eagle were raised, which gave an impression of a round headed bird much like that of a Red-tailed Hawk. The beak of the bird looked small and delicate. Indeed, the image I saw was endearing, and was far from the usual fierce demeanor that eagles often portray.

I included the following video of another eagle I found perched on a rocky hillside. This video adequately illustrates my experience, as I watched the bird from afar, through my scope. Using my camera phone, I digiscoped the bird. I am pleased that the bird does not simply sit motionless, but is often glancing about, surveying its surroundings.

The video is not the best in quality. I do like the aesthetic though. I wanted to illustrate how it might look through the lens of the scope. I have been taking some video with my telephoto lens, and will surely share when they are ready.

I have found a wide variety of birds while I have been traveling the west desert. Buteos abound in the agricultural areas, and I have been blessed by finding the best of the birds. I can’t believe the number of Rough-legged Hawks that I have stumbled upon. I find more than twice the number of B. lagopus than B. jamaicensis, which is surprising. I cannot wait to share my discoveries, birds and beyond. The desert is home to unique structures, abandoned vehicles, and any number of remnants from humanity’s past in the place. Juxtaposed against the otherwise human-less landscape, the decaying history presents a dramatic scene of which I love.

Next week brings the second leg of my adventures. I am anxious and excited to hit the road again, in search of N. America’s Aquila, and whatever else may come. 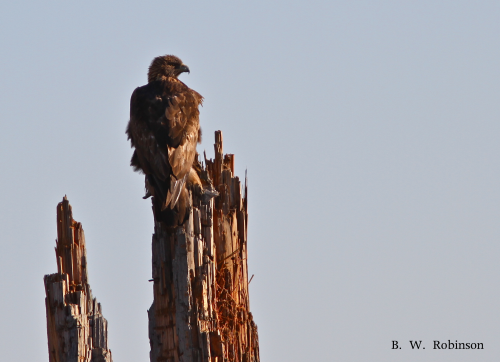 When I am not counting them, I am drawing them. I sat in my hotel room this morning, pondering how I might make use of my day. Of course my only day off of the mountain for the week is important for household chores such as a shower and laundry, but I always find pressure to stay away from the television and do something constructive. Sketching in my journal seemed like perfect way to pass the time. After all, I need to work on refining my skills. With the most appropriate music, I sat and sketched the day away. It was both relaxing and fruitful.

My journal is 8×5.5″, so it is very difficult to fit a flying hawk onto a page. I also used the smallest pen I have at the moment, an 01 which is not my preferred pen. I normally use 005, especially when illustrating a smaller bird. I still feel that my pen drawings are a bit unrefined. More effort and practice may produce more desirable birds. Still, I find myself staring at this flying Red-tailed Hawk with a smile on my face. I am trying to make the bird stand out with all of the particular field marks that make it appear true to the winged wanderer that I see nearly every day.

I love topside views of soaring hawks. This is possible my favorite thing about observing the fall migration on a ridge top. Only the most special of places leave you with a view of a soaring raptor below. I am always giddy when I come away with a good photo of a bird below my eye level, and illustrating the birds as such provides something similar to that feeling.

I had to sketch a Golden Eagle today. We have caught three this season, each bird as special as the last. I cannot describe the feeling of beholding these large winged predators. They are as beautiful and fierce as any big cat, bear, or predator alike. They are powerful, intelligent, and proud. The spirit of these birds interacting with my own caused such an emotional clash, that I could not help myself from shedding a tear. This emotion I will forever remember, and work to pour into every piece put forth that highlighs the majesty of the Golden eagle.

From the Field Journal- Golden Eagles at the Goshutes

Two full weeks have passed at the Goshutes, and already I have accumulated many incredible stories. Life on the mountain is as close to heaven as I can get at the moment, I am sure. I’ve decided to chronicle my time here in a field journal. I will share my experiences from the journal by posting particularly interesting accounts. What follows is an entry I made last week, after observing one of the most spectacular wildlife events I have ever witnessed.

Early August has been fairly bird-less as far as migration goes. Although birds haven’t been moving through, a great host of local raptors are keeping me entertained. I have many stories and experiences to tell of a whiny young Goshawk, pestering Sharp-shinned Hawks, bold and curious buteos, and countless others. For now, I’d like to tell of an experience I had today on my observation post. Jerry and Deneb were helping me with the count, as my co-counter Steve had yet to arrive on the mountain. Jerry and Deneb are old friends of seasons past here at the Goshutes. It was rather enjoyable to listen to their banter as they interacted as old friends often do. Jerry helped pass the time, taking it upon himself to teach me the tricks and tips he has accumulated from some thirty years of experience counting migrating raptors. Needless to say the lack of birds was made up for with teaching, chatter and humor.

About mid-day, the three of us, steeped in some conversation of trivial matters of the world, were rocked as an intense sound of friction filled the air. Looking above towards the source of the sound, we saw two large air masters pass directly overhead. In fact, what we observed were two large adult Golden Eagles engaged in a dramatic and deliberate stoop, heading directly east with conviction. Excited and in awe, we watched the birds descent. By sight and sound, the large Aquila birds resembled two fighter jets in arial pursuit. Near the bottom of the canyon, the two birds abandoned their stoop, spreading wings, slicing the air with legs hanging, a posture of aggression. As we watched, we realized their intention. Picking up a third bird, we saw the eagles close on a soaring buteo, an adult Red-tailed Hawk.

The unsuspecting buteo realized the danger just in time. It began evasive maneuvers to avoid the slashing talons of the eagles. The menacing eagles made pass after pass at the fleeing buteo. I was astonished at the sight of their cooperative offensive. Such slow soaring raptors had turned on their agile abilities, and it became apparent that these birds are masters of the wind and sky. The dog fight continued, and the skilled buteo somehow remained untouched by the merciless eagles. Finally, finding a bubbling thermal, the Red-tailed Hawk lifted swiftly in the air. The heavy eagles slowly pursued, but were unable to match the rising speed of the fleeing buteo. I was in awe at the violence I had witnessed. Such raw experiences rip away the feeling of fluffy beauty nature often promotes. The natural world is wild, harsh, and unforgiving. This time the hawk had evaded the eagles, and peace returned to the air.

As we stood recounting the natural marvel we had just witnessed, our reflection was rocked by the majestic image laid out before us. To the east, against the expansive backdrop of the salt flats of western Utah, another Red-tailed Hawk joined the soaring victim of the eagles. Separated by hundreds of feet, two buteos above, two eagles below, raptors alike soared in unison, circling in the calm afternoon air. Taken aback, I again and for the hundredth time that week, voiced my feelings for the place. Full of magic and natural wonder, even before the migration has truly begun, the Goshutes has captured my heart, and I am truly at peace in this place. There is no where I would rather be, as I sit on a mountain top, feeling as close to heaven as is possible.