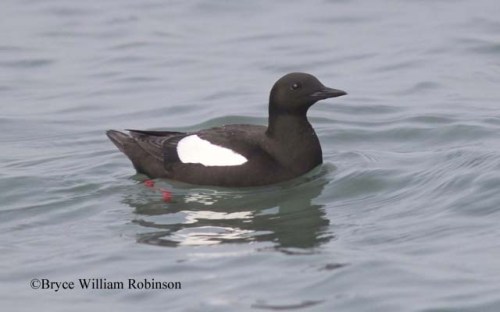 I’ve seen little of the worlds Alcids. Perhaps my lack of exposure is the reason for my heightened fascination with this bird group. While on the shores of the Arctic Ocean this summer, I knew I had one bird to see, Cepphus grylle, the Black Guillemot. Guillemots are not uncommon in coastal ecosystems, but they are delightful birds in my opinion. Their red flesh, in the mouth especially, is what really draws me to them. The common and very close relative the the Black Guillemot is the Pigeon Guillemot. Superficially the birds are identical, except for a few key features. My task was not only to find the Black Guillemot and get some great photos, but to document the differences that separate the bird from the Pigeon Guilly. In doing so, I would learn the difference for myself.

The area around Prudhoe Bay lacks any coastal cliffs, so I knew I’d be out of luck finding a nest colony. I  had to muster my patience for the guillemots to show up when the sea ice had melted sufficiently. Luckily, the intense nesting season of the shorebirds kept me busy and entertained enough to keep the itch to see the Black Guilly at bay. In early July, the ice was gone, and I began to look for the bird.

There is a drill pad sitting in the middle of the bay, accessible by road. They call the pad Endicott. Imagine a monstrous monolith sitting in the Arctic Ocean. A large steel structure, an emblem of the beauty of human advancement and industry, entirely appropriate of the name ENDICOTT. Lucky for me, the shores of Endicott are gravel covered, and in some areas the shore is comprised of concrete barrier blocks. I believe this adequately imitates coastal cliff regions, which draw in alcids such as the Black Guillemot. One afternoon I finally found the birds at Endicott, very close to shore, chasing snow buntings and feeding on the shore bottoms. At the time, I could only look, but resolved to return.

When I finally did return, I was escorting a bird man named Richard Crossley around the oilfields ( A story in and of itself). I remember walking along the slanted concrete blocks with a few friends, rediscovering the black and white alcids, and sitting patiently, waiting for them to wander closer to our lenses.

There I sat with my friends, Crossley, Jie Kim, and Caitlin Davis, watching the Arctic Ocean and the Black Guillemots. Finally a bird came near, and we let our shutters fly. I was certainly pleased with the experience. After a few minutes of shutter clicks and giggles, the bird became wise to the human admires, and fled. While it fled, I photographed, and caught one telling feature that separates the Black from the Pigeon Guillemot, the white underwing.

The white underwing of the Black Guillemot separates it from the gray or dark underwing of the Pigeon. Of course, at this point I would love to supplement the photo with a photo of the Pigeon’s underwing, but I didn’t do my duty of photographing the bird extensively when I was watching hoards of them along the pacific, earlier this year. Jerry Liguori has told me countless times that I should photograph everything all the time, just in case, and I’m just starting to see the negative impacts of not heeding his advice. Well, I’m learning…. I’m beginning to think I’ll always say that.