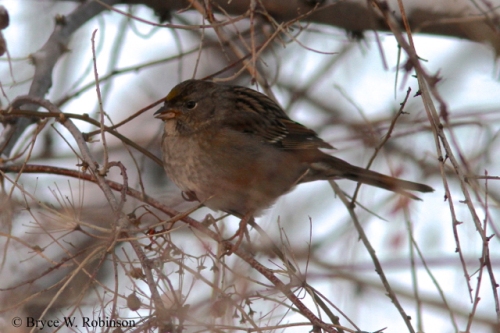 Yesterday I joined Jay Carlisle, Heidi Ware, and a number of other folks for the Nampa Christmas Bird Count in south western Idaho. The day started out right. We began at Caldwell Ponds before sunrise for an attempt at turning up a few owls. Sure enough, a few Barn Owls hunted the fields, trying to squeeze in a meal before light.

When it was light enough, we started working the thickets for sparrows. Flocks of White-crowned Sparrows were sounding off, which is always promising, as they often hold something special in their ranks. Sure enough, Jay called out two Golden-crowned Sparrows. The Golden-crowned Sparrow is hard to come by in Idaho, but each year Jay and Heidi have participated in the Nampa CBC, they have found a GCSP at Caldwell Ponds.

I stayed behind with the sparrows to attempt some photos. The birds were rather tolerant before the sun rose. I managed a decent photo of one GCSP, but in poor light. When the sun finally rose, the birds seemed to avoid me, and although I spent ten minutes stalking the birds, I never managed  a photo in the golden morning light. 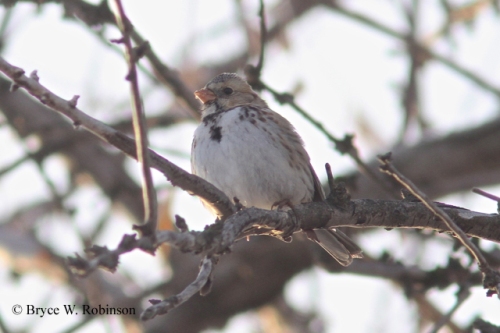 When I caught up to the group, they were working a thicket, sifting through another healthy flock of White-crowned Sparrows. I went around the group to head off some outside individuals. While sorting through a small group, I spotted a recognizable pattern deep in a bush. I didn’t want to cry wolf, so I held my tongue for a bit. Soon enough, the bird popped up onto the top of the bush, and showed itself. I alerted the group, Harris’s Sparrow!, our third Zonotrichia species for the hour. 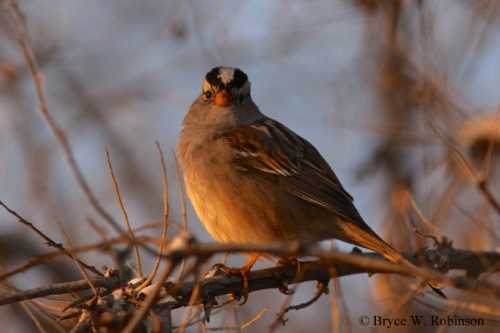 I soon realized that after getting the hardest Zonotrichia, the GCSP, so early in the day, seeing all four was a distinct possibility. All we needed to find was the White-throated Sparrow, an uncommon bird for winter in Idaho. The bird is uncommon, but multiple individuals are found every year. In fact, I had found one two weeks ago in Boise. The reality of reaching the goal was there.

Later in the day, I split off from the group with Heidi. We were charged with checking a few hotspots, and we both had one bird on our mind. Heidi has never seen all four Zonotrichia in a day, so the goal was looking sweet to her eyes as well.

For the rest of the day we sifted through sparrow’s with no sign of the fourth Zonotrichia. We turned up other good birds, Savannah Sparrow, Lincoln’s Sparrow, and two Bewick’s Wrens. But by the end of the day, as the sun set and we continued to look through White-crowned Sparrow flocks, we came away without our prize.

Well, we almost “pulled a Zonie”! I kept telling Heidi I was going to make “a Zonie” the term for seeing all of North Americas Zonotrichia species in one day. It’s a worthy goal, and a respectable badge, that deserves some title, even if it is a bit dorky.

I didn’t realize how doable a Zonie is for Idaho, but it sure is. I’ll be after that goal now. I have heard and seen photos of a man in southern California that had all four at his feeder one day. That is remarkable. So now I have a new goal on the horizon, to see and photograph all four of North America’s Zonotrichia sparrows in a day, or simply, to pull a “Zonie”. Let’s hope it doesn’t turn into a nemesis goal, or white whale, or whatever you might call it.

Here’s the bird that got away.