I had the privilege of designing a logo for a regional Partners in Flight working group, the Boreal Partners in Flight (BPIF). Members of this group span Alaska and western Canada, with work focused primarily on but not restricted to Boreal and Tundra dwelling taxa. To craft the design, I worked with members of the group and selected a few focal species to be featured. Carefully picked, the species also are aesthetically tied, and provide an appropriately cold image with some sharp red highlights. These species, the Willow Ptarmigan (Lagopus lagopus), Northern Goshawk (Accipiter gentilis), and McKay’s Bunting (Plectrophenax hyperboreus) all share some research focus from members of BPIF.

To find out more about the members of Boreal Partners in Flight, and the objectives of the working group, visit their website here. 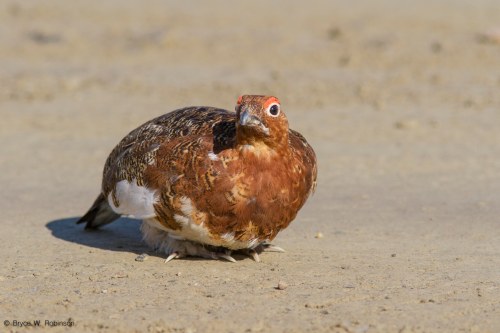 Willow Ptarmigan (Lagopus lagopus) have layers of interesting traits. I’m lucky to spend enough time on the tundra in a given season to see them change in both appearance and behavior. The change in behavior is drastic, and the change in appearance holds loads of context and lessons on the mechanisms and results of evolution.

Last summer, sometime in early-mid July, I noticed something odd about the appearance of male Willow Ptarmigan. They seemed to be replacing feathers on their rufous neck. The replacement feathers were patterned much like their new “summer” body feathers. The odd thing is that their “winter” (basic) plumage is entirely white, so these new patterned feathers that were replacing the rufous feathers were a third set of feathers for that year. I was perplexed by the idea of a third body molt.

After reading, I’ve learned that this third molt, which happens in late summer, is a pre-supplemental molt. This is most often a partial molt, but is a third molt supplemental to their pre-basic and pre-alternate molts. It piques my interest because it holds with it an evolutionary story. In fact, the entire molt cycle of the ptarmigan holds a lesson for how natural selection and sexual selection balance to create the appearance of the Willow Ptarmigan we see today.

The yearly plumage cycle of the Male Willow Ptarmigan is as follows:

This molt pattern reflects the ptarmigan’s place in the ecosystem as a key prey source for many arctic predators. In winter, it inhabits the snow covered arctic and is wholly white, blending in with its surroundings. In early spring the snow melts and the white ptarmigan are then conspicuous against the landscape. Male and female ptarmigan then begin their pre-alternate molt. They both, however, molt in different ways. The male molts the neck feathers into a bold and warm rufous. They then begin flight displays, making themselves known in their surroundings. This behavior and appearance lasts until females begin egg-laying and incubation, when the males shift to cryptic behavior and begin molting the remaining white body feathers. Later in the summer, the rufous neck is replaced by patterned feathers, increasing their camouflage for the remaining snowless months, until they again molt into their wholly white winter plumage. Male Ptarmigan strike a balance between being conspicuous and alluring to females for a short period of time needed to procreate, then molting into a more cryptic plumage to safeguard them against predators. Females on the other hand have a relatively regular pre-alternate molt which puts them in their cryptic summer plumage, ready to lay eggs and incubate. This molt strategy stands as an excellent example of the mechanisms of evolution, and how sexual and natural selection can together shape the appearance of a species. The difference between the molt of male and female ptarmigan reflects their sex specific roles, and again betrays the role natural selection has played in shaping them into what they are today.

Another interesting observation to note: In summer, Willow Ptarmigan appear to molt the feathers that give them their genus and specific epithets, the foot feathers. It appears that they actual “shed” the winter feathers and have somewhat bare feet (Photo1 &3).

I happened upon the pictured pair of Willow Ptarmigan the other day while driving down the road. I could see a brood of about eight chicks with them. When I stepped out of the car, the parents began distraction and defense behaviors to protect their brood. I am impressed by their boldness. The female roused, fanned her tail, hissed, and approached me. She did her best to intimidate me. Meanwhile, the male hissed and approached, but also slinked away as if injured or baiting me to follow. He walked in an army crawl fashion, low to the ground. It seemed as though he were trying to be cryptic, so I’m not sure if he was attempting to sneak back to the brood or seem injured. Either way, the two parents employing tactics on me to distract from their brood was almost comical. It worked though. The brood took cover and were quite. They were nowhere to be seen.

Photo 4. Female Willow Ptarmigan, roused to appear large and intimidate intruders. Note the rufous feathers amidst golden feathers. These may be replaced feathers as part of a partial pre-supplementary molt as seen in the male.

This behavior is a mega change from the timid pair from the month of May. They seem as though they are entirely different birds. When approached in May, a male would hold his ground and act bold. Females would hide and slink away. Still, most birds would flush if approached to closely. With the addition of offspring, the behaviors take a large swing. Now they fight and distract. A change that again betrays the underlying evolutionary mechanisms. Natural selection has resulted in some remarkable behavior. Those that have braved an intruder, distracted from a brood, and so on have raised young successfully, and whatever behavioral cue was present in them was passed on to future generations.

When I recognize a relationship of appearance, behavior, phenology, distribution, etc. to evolution I get excited. It not only supports the theory of evolution, but serves as a clear lesson to communicate how evolution works. Taking a group birding on the tundra and showing them this behavior, coupled with a discussion on the why’s of the parents appearance would be blast. It’s behavior birding with a broader context. It’s a very rewarding type of birding, and something I’d love to share with anyone nerdy or keen enough to appreciate. After all, ptarmigan are a lot more than a tick or a check on a life list, and a lot more than just tundra chickens or Gyrfalcon food. Ptarmigan have layers of interesting aspects to their life history, but I bet that is true of most birds…

My exposure to Ptarmigan this past summer was not limited. Although I haven’t been able to track down the White-tailed Ptarmigan, I have had a lot of experience with both the Willow and Rock Ptarmigan.

Without hesitation I’d say that the easiest way to distinguish the two species is by call. This is very helpful in early summer, when males are traipsing around the open tundra, full of hormones, calling and chasing one another constantly. But what about later in the season, when birds are more cryptic? What about females?

The differences in plumage are subtle, and so far I feel I could only distinguish females in alternate plumage if they were side by side.

Shape is a helpful tool. Richard Crossley asked me how I distinguish between the females of the two species. My response was head shape, but he persisted and exposed my lack of confidence with the parameter. I feel like I have head shape down, but I’ll need more practice this coming summer as I chase the Gyrfalcon around the Seward Peninsula.

I chose to share the above photo as it shows a Rock Ptarmigan in late June. In late may, male Willow Ptarmigan already have full reddish necks, as they have started their pre-alternate molt. Interestingly, male Rock Ptarmigan do not begin their pre-alternate molt until early July. This makes for a simple identification tool. I’ve yet to research any answers to this difference in timing of molt between the two species. I of course, encourage any discussion on the matter.

Alaska Mosquitoes Are the Bane of All Existence, Even for the Willow Ptarmigan

What is the Alaska State Bird? Well, according to everyone I spoke to before my journey north, the Alaska state bird is the Mosquito. I’ll admit now, I understand their point. If there is no wind on the north slope, and temperatures are fair, the mosquitoes are intolerable. Luckily, one can prepare for the onslaught by bathing in carcinogenic 100% Deet and wearing cumbersome face nets.

One can prepare, if one is human. I saw first hand the other night that all blood carrying life here suffers from the miserable insects. I was watching a Sandhill Crane feeding in the short grass of the tundra. In an instant, the peaceful scene changed as two violent Willow Ptarmigan began a campaign to oust the crane from their area. I assume the behavior was due to the presence of a band of small young ptarmigans, hidden somewhere nearby.

After the crane wisely vacated the area, I took the opportunity to pair the striking summer plumage of the two ptarmigan with the golden evening sun for some spectacular photography. The Ptarmigan were cooperative. I set myself at an appropriate distance from the birds, and laid on the tundra to sit at their level. While I shot the birds, the Alaska state bird conducted its business on all of my vulnerable areas. It’s been three days, and I’m still itching.

What struck me most was the amount of mosquitoes on the head of the male Ptarmigan. The poor bird was constantly shaking the bastards off, but to no avail. He was being mercilessly bitten, and had no defense. I felt for the small feathered creature. In this instance we shared something; the misery of the mosquito, a fact of life in the north country.