Harlan’s Red-tailed Hawk on the Breeding Grounds in Alaska

This post details my encounters and notes of Harlan’s Red-tailed Hawks in Alaska during the early summer of 2016. The post is separated into two parts, individuals I encountered while conducting the Alaska Land Bird Monitoring Survey in the remote western interior, and individuals I’ve encountered in the Anchorage area.

From the Innoko National Wildlife Refuge: 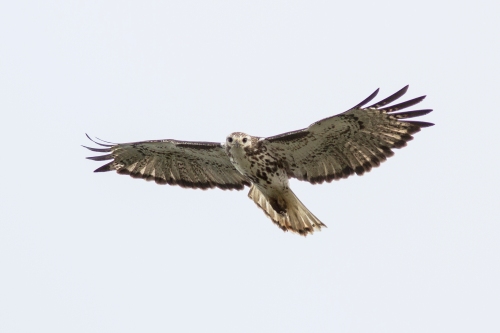 I just returned to Anchorage from two weeks of bird surveys in the interior of Alaska, conducting the Alaska Landlord Monitoring Survey for the Boreal Partners in Flight. These surveys entailed travel to three remote national wildlife refuges; Innoko NWR, Nowitna NWR, and Koyukuk NWR. The aim of myself and my friend Nick Hajdukovich was to conduct point counts on refuge land. Our travel consisted of float plane transport to each refuge. Once in the Innoko, we logged 200 miles of river travel on the Innoko River to and from our two survey plots, which provided me with great exposure to untouched Alaskan wilderness. Along the way I happened upon a few individuals of perhaps my favorite bird taxon, the harlani subspecies of the Red-tailed Hawk. 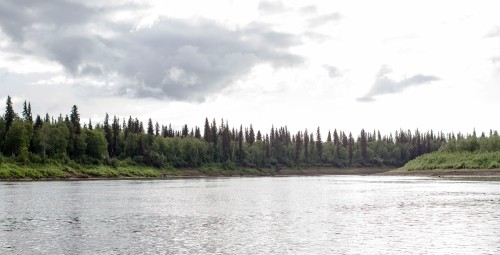 The first birds I encountered on the Innoko River happened to be a nesting pair. Their nest was situated on a partially fallen White Spruce that extended over the open river. As we approached the nest we cut the motor and drifted directly beneath the brooding female. At 200 m from the nest a light morph bird, the male, took flight from a nearby tree and began vocalizing and stooping on our boat (Photo 1, 3). As we floated by, I took the opportunity to document the situation. 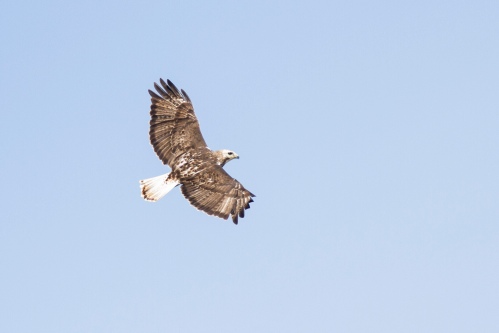 It was excellent to observe the defensive behavior. Equally excellent was the light morph plumage of the male, and his silver/white tail with hints of red near the tip (Photo 3). As we passed the dark morph female on the nest (Photo 4), we could see her heavily banded tail, dark and red throughout (Photo 5). The variability in tail pattern in these birds interests me greatly, and it was excellent to see this dark bird with a near wholly red tail.

The female was sitting in the nest, along with one nestling which appeared to be around 15-20 days old. The nestling was panting in the intense Alaskan sun. The temperature was a balmy 70 degrees Fahrenheit, very warm for Alaska. We drifted on, got our fill of photos and satisfying looks, started up the 5 HP motor, and continued our trip.

Throughout our trip we saw a few other adults, all dark morphs that one would consider “typical” harlan’s with whitish and silver tails, white streaked bibs, etc. The birds were uncooperative for photography, except for two individuals that happened to be my most sought after group of this taxon, second year birds midway through their pre-basic molt (Photo 6). I included a photo of one of the individuals, as they were quite similar in appearance and at the same stage in their molt.

The degree of molt which these young birds undergoing is worth noting, as compared to all adults that I’ve seen. All adults, presumably breeding, are limited in the extent of their feather replacement. The two Second-year birds that I’ve photographed are molting heavily, as you can see in photo 6. This speaks to the energetic requirements of both molt and the reproductive effort, and the trade-off in allotment between both, something of which I’ve noted before in Gyrfalcons (find it HERE).

Overall the time spent in the western interior was grossly fruitful in my exposure to Harlan’s alone.

From the Anchorage area:

Something interesting is happening in Anchorage. Although I’ve seen plenty of birds in the region that fit what we call the “typical” Harlan’s (Dark morph, light bib, silver or white tail, mottled flight feathers, etc.), I’ve found two individuals, a pair, that are worth documenting. It’s important to note that I’ve been working in a fairly restricted area on the U.S. Air Force base at the north end of the city. I haven’t been able to cover much area throughout the valley, but much of my assumptions about other Red-tailed Hawk in this region come from observations at Gunsight Mountain Hawkwatch.

The first bird is a light morph female that my friend Laura showed me (Photo 7.). Although it has qualities typical for Harlan’s such as a mottled tail with silver and white tones amidst red, and globular belly markings, it also possesses traits reminiscent of other subspecies such as B. j. abieticola (Northern). Most notable is the barring throughout the wing lining, and on the belly. Also notable is the regular and distinct barring in the flight feathers. The question arises whether this bird’s phenotype is an infrequent but regular occurrence in the harlani population, or a result of integradation somewhere in its recent lineage? Although the area is an intergrade zone for many other species, I’m fully comfortable saying that I don’t know, nor do I want to suggest one over the other.  The most exciting part is not knowing, and realizing there is a frontier to explore in our understanding of this species.

The second interesting bird from the area is perhaps more exciting (Photo 8). It shows no indication that it belongs to the subspecies harlani. It resembles a dark morph calurus, with some unique contrasting qualities to the auxiliaries and undertail. I’m not sure what subspecies this bird is, but if I were to guess I’d say this bird fits with the Northern population (abieticola), suggesting that this subspecies is polymorphic. Regardless, This bird along with observations at Gunshight Mountain hawk watch support that the Anchorage area and Matsu Valley are an intergrade zone, as is the case with many other species. I think there remains much to learn about the biogeography of Red-tailed Hawks, especially as it pertains to this small area of Alaska.

Red-tailed Hawk in Pen and Ink 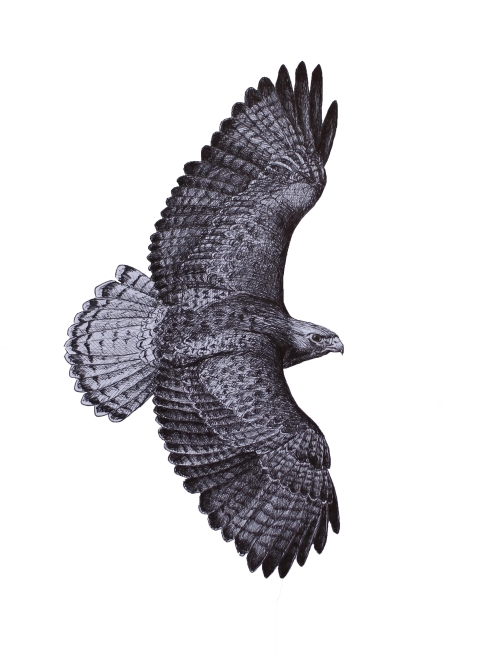 I view illustrating birds as an exercise of my ability to create an accurate rendition of my subject. I’ve recently began recognizing a need to incorporate study into this exercise, and as I stated in a previous post, I plan to do so by first illustrating and then reading a scientific article that pertains to my subject. But, I’d like to add another component to my illustrations. I want to make an image that communicates useful information.

I was asked to illustrate a Red-tailed Hawk in black and white, so I took the request and made it an opportunity for me to try a concept I’ve been thinking about. I want to create images that I can teach from, or that simply communicate information for those looking to learn something about each bird. For the Red-tailed Hawk, I wanted to create an image of a bird that could be aged, as if it were a real bird being scrutinized by a biologist.

The above bird is my first attempt at illustrating staffelmauser, or staggered molt. Through illustrating this as it is seen on actual hawks, I made an attempt at communicating the necessary information for age determination.

Here is the breakdown of the birds age:

This hawk is an adult, as dictated first by shape. The wings are broader, giving the tail a shorter appearance as well. The presence of a thick subterminal band on both the tail and wing also indicate that this bird is older than a juvenile. In age determination terms, it is at least “after hatch year”. But, we can take it further. The next step would be to search for molt limits in the flight feathers, that is the presence of retained feathers. Retained juvenile secondaries would be shorter than adult feathers, and lack a thick subterminal band. If this is found, then the bird is in its second year. I illustrated the bird with two generations of adult feathers in its secondaries, and two waves of molt in its primaries ( the staffelmauser, or step-wise molt). The older feathers are paler, as they would be in an actual Red-tailed Hawk. Because of these two generations of adult feathers in the secondaries, we know that this bird is an “after second year”.

Tail banding in Red-tailed Hawks is variable. Many “western” birds, subspecies calurus have multiple banded tails in their definitive plumage. So, this is a useless trait for age determination. To read more, and for a more clear and detailed explanation by the expert, check out a recent article written by Jerry Liguori on Hawkwatch International’s blog.

After all I produced the image I was hoping for, but it isn’t as correct as I’d like it to be. That is the exercise. Each time I finish an illustration, I take a few days to let it sit and be, then return and look for areas that I need to improve. This time I requested some additional critique from a knowledgable (understatement) friend. I now have a list of things to pay attention to the next time I illustrate this bird. I like where I’m at, but I see the need to keep going.

HawkWatch International recently released a few shirt designs featuring artwork of mine. My friend Mike Shaw had the great idea for a design that took a field guide type format, and put it on the shirt. The shirts feature two Buteos, the Red-tailed Hawk- Buteo jamaicensis, and the Rough-legged Hawk- Buteo lagopus. These illustrations feature callouts that give the viewer a few key tips at identifying the bird. I love the idea, and the shirts turned out great.

A little background on the development of one shirt, the Red-tailed Hawk, might be interesting to some. I really love this illustration for its purity. While counting the raptor migration last fall on the Goshutes Raptor Migration Site in eastern Nevada, I had plenty of time in the evenings to sit by candle light and draw some of the things I saw that day. This illustration was done at nine thousand feet, on the top of a mountain, in the middle of the magic of migration, by candle light. It makes it more special to me, and I hope those that now know where that illustration was born, might enjoy it all the more. I love things with a story attached.

Here are a few images of the illustration on the mountain: 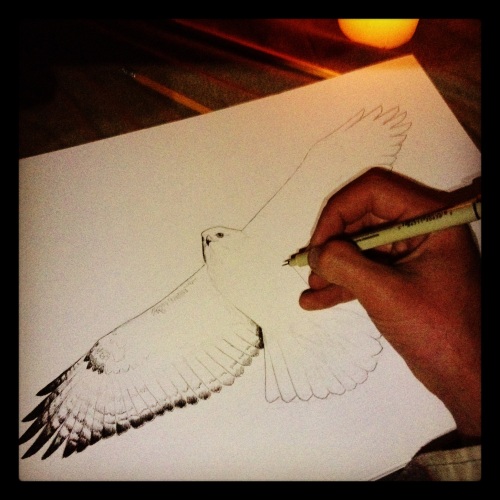 The inception of the illustration 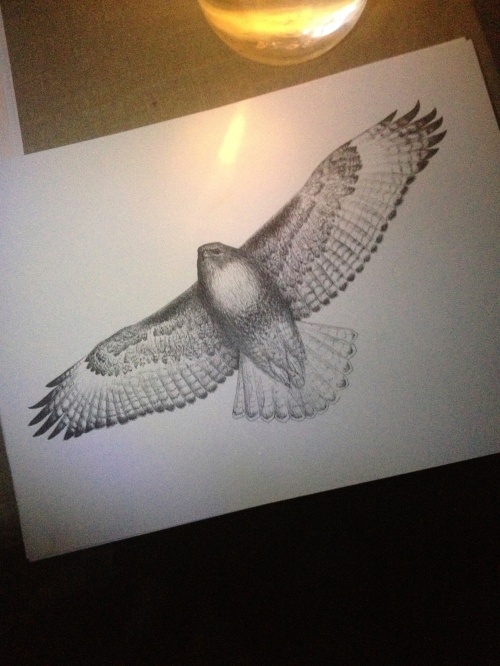 The result, with a splash of the candle light that helped create the image

New Shirt Designs Featuring the Art of B William Robinson

HawkWatch International is an incredible organization. I encourage you to support them by purchasing one of their new items. To be transparent, I do not benefit financially from the sales of these shirts. I simply want to see more people joining conservation initiatives. It would be neat to meet someone on the road that I didn’t know from Adam, garnished in one of these shirts, supporting and spreading the good will of conservation, and of course the knowledge and fun of raptor ID.

I took this video the other day. At the beginning, you can see the bird reject the intestines of the rodent. Everything else is consumed. It is a bit long, but worth a watch. The hawk gets very animated towards the end. It is quite the treat to view, as a great deal of detail is visible.

I wonder about this bird. In the winter, it is difficult to distinguish visitors from residents. This is a unique looking bird. White on the lores, crown, and supercilium is not common amongst Utah’s western Red-tailed Hawks. Perhaps this is a bird from the north country. One cannot be sure, but it is fun to wonder.