Painting Pochards and Mergansers- An Aesthetic Approach to Listing

After a recent trip to the Lee Kay Ponds for an afternoon of birding, I resolved to take to painting to pick up where photography fails. I will soon begin taking a watercolor field kit with me when birding, to sit and record crude paintings of what birds flit and fly before me. This approach, I believe, will help my identification skills grow.

At the ponds, I soon realized that photographing waterfowl was nowhere near worthwhile at the time. The majority of the pictures I took were not only too far from the birds, but were also confounded by the sunlight reflecting from the water. Afternoon is probably not the best time to take pictures. My novice skills with a camera left me without any quality images from a few hours of birding.

I do not bird for the photographs. I had a wonderful time with the birds I was able to see. Still, I love using pictures to share the things I find. After reviewing my photographs at home, I resolved to record what I had seen in picture by painting, not just listing. I am not a lister, and I hardly spend the energy to carry a journal with me while I bird. I understand this is not a good behavior for a birder, but I simply do not have the drive to note the number of birds I find. I feel that the experience is the reward, not a list of english words after the fact. Still, I suppose my listing is done through photographs, but I have resolved to begin a new technique for recording my sightings.

After seeing a number of birds in eclipse plumage, I wanted to share the difficulties that this may present. Waterfowl are fun, due to the various plumages of the males and the difficulty of identifying females. In winter, males transition into what is termed an eclipse plumage, which is their basic plumage, looking a deal more bland than their alternate plumage that most are known by.

As I looked through the photos I started painting crude watercolor images of the various but similar birds I saw. One genus that was well represented was Athya, or the Pochards. These are a type of diving ducks that hold some fun identification challenges. They are also simply stunning creatures that bring a load of excitement for geeky birders such as myself.  Along with the Pochards, I was able to see some Mergansers, a bird group of which I rarely see. I never take seeing these birds for granted. 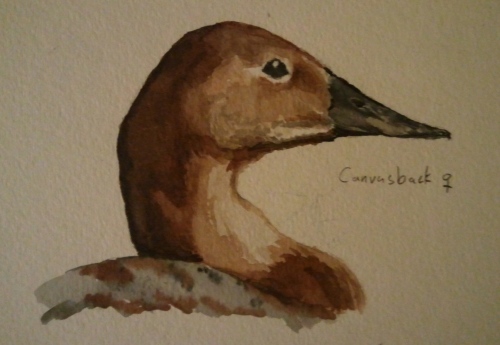 I stopped a number of times to rescan groups of birds, making sure I didn’t miss anything. This exercise proved worthwhile a number of times. Most birds sat in small groups, however there were the occasional loners . One such loner was a striking female canvasback (Aythya valisineria). With the possibility of confusing the adult male in eclipse or basic plumage with the female, beginning birders may find lone birds such as this a bit of a challenge. To quickly resolve whether the bird is male or female, look to the eye. Males have a red eye, the females is dark. Eye color may not be the best indicator when viewing a bird from afar, so there are other patterns to look for. Generally eclipse plumage looks just like a dull form of the alternate, so look for the dark breast and pale body. With exposure and effort, or simple exercises such as painting or sketching, identifying male eclipse from female with a lone bird will become effortless and automated. 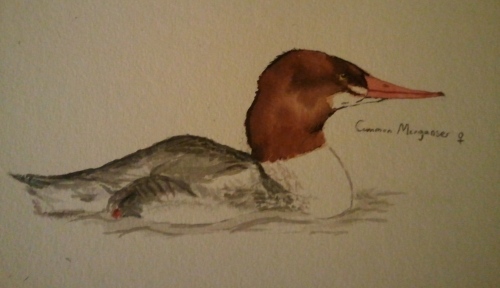 Another lone bird gliding through the water was a large bird of similar color to the canvasback. From afar, one would not know the difference, but when I took a close look through my binoculars, I could tell the bird was not anything of a duck. The long thin dinosaur like bill told me merganser, and in fact I certainly was looking at a female Common Merganser (Mergus merganser). The last time I saw this species was deep in the Grand Canyon, on the shores of the Colorado River. As I watched the water pass in rough and steady motion, I beheld a rapid rider wearing white with a green head and striking red bill. The Male is captivating in appearance, but seeing this female on the peaceful waters of the ponds gave me that same impression of beauty.

A bird I often see on the calm waters in winter is the Ring-necked Duck (Aythya collaris). This duck is not a challenge to identify as it is not similar to any other Pochard save the Scaups. One would more regularly confuse a Scaup with the Ring-necked, because of the telling bill markings that stand out even at a distance. The Lesser Scaup (Aythya affinis) may trick the beginning birder. As I scanned the pond I saw a group of dark headed ducks sleeping on the waters. There was a time when I would have moved on thinking I was looking at another group of Ring-necked Ducks, however this time my mind picked up on the differences that separate the two. I watched until one of the sleepers raised its head, giving me a definitive view of a Lesser Scaup. 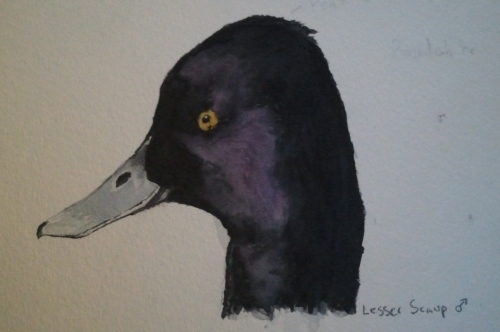 As I learn more of the ins and outs of bird identification, I find more and more difficult seemingly identical species that confound the birder. The Scaups are an extreme. At first glance they look like the same bird, but if you take the time to learn the subtle differences between the Lesser and Greater Scaup, you will soon find that they are easily distinguishable. A Greater Scaup in Utah would be uncommon, not impossible by any means, but uncommon. Still in order to pick up on the rare vagrant, one must be familiar with the differences. Head shape is the most common tip to telling to two apart. I seem to see eye placement as a great help as well, but this has some possibility for failure because the head shape can be manipulated by feathers. Still, a more rounded head with a front central eye placement indicates a Lesser, as opposed to a rectangular shape with high eye placement of the Greater. Also, the iridescence of the lesser is purple, the greater green. 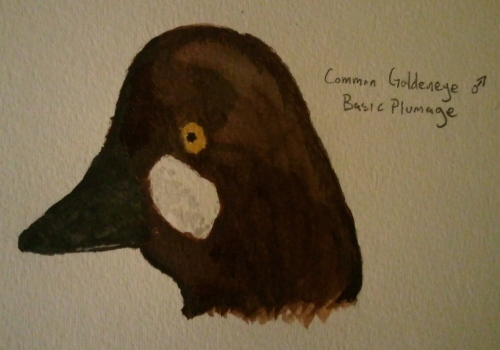 The most common bird on the ponds that day, besides the Mallard of course, was the Common Goldeneye (Bucephala clangula). Their eclipse plumage is still striking, and they are easily picked out from a crowd due to their white bodies. The females are easily distinguishable too, however there is a confusing aspect to this bird. A few winters back I found a lone Goldeneye in a canal near Utah Lake. It lacked a white loral patch which through me for a loop. After some research, I discovered that first winter birds have this distinctive look. An identification difficulty quickly resolved.

While I was leaving I stopped to look at a small group of Hooded Merganser (Lophodytes cucullatus). The group consisted of one male and five females, or so I thought. After snapping a few photos knowing that the quality would be poor, I travelled home. When reviewing the photos at home, I took a closer look at the merganser group. It was not until then that I realized the fifth female merganser was in fact a female Bufflehead (Bucephala albeola). How I had failed to see this in the field is still a mystery in my mind, yet it points to an important tip. There will always be things that are looked over, so it is important to spend the time and watch. Really watch and search for things. This lone female Bufflehead was the only Bufflehead I saw all day. What it was doing flocking with the merganser group is a mystery I do not know the answer to. I included a watercolor of the female Hooded Merganser with the female Bufflehead to illustrate how silly this oversight was.

Overall the few hours I spent at the pond were wonderful. To close, here is my list for the day: