Western Grebe vs. Clark’s Grebe- An Easy Tip for Distinguishing the Two

The past fall, I travelled the roads of the Bear River Migratory Bird Refuge in search of wayward migrants and peculiar passersby. I found the waters full of many birds, but the most prevalent was the black and white Grebe. Thousands upon thousands of these birds littered the waters, feeding and resting, preparing for the next leg south to their wintering waters. I have seen many grebes in my day, and I admit that something about the birds intrigues me more than usual. Perhaps it is the way they carry their young upon their back, and dive into the water at the first sign of danger, only to resurface with the chick still riding steady. I have followed grebe in my kayak many times, and observed in depth their defense technique as they dive and resurface farther from me.

The grebe is designed to swim and dive for food. Their hind legs are positioned farther back on their body than normal, making them awkward and clumsy on land. As lame as they appear on land, they make up for in the water. Their mating display is famous. Pairing up, two grebes run synchronously along the water until diving. Such a bonding display leaves the birder in awe.

While I watched the grebe populations this fall, I realized the identification difficulty that is present between two species of north american grebe. I would like to illustrate a technique I use for study, in hope of communicating not only an easy answer to an overwhelming question for new birders, but also a way to quickly solve any difficult learning problem in bird ID.

The Western Grebe and the Clark’s Grebe look identical at first glance. As the two distinct species occupy the same range and habitat, it becomes a challenge for the beginning birder to differentiate the two. I have illustrated the difference, which not only solidifies the fact in my own mind, but may better communicate the ideas that I write for the reader. 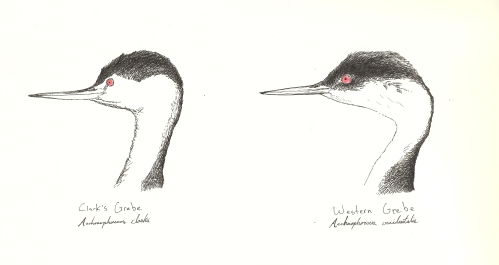 Truly, the Clark’s can show some darkness around the top of the eye, but this fact illustrates an easy way to distinguish the two. One factor I failed to include was bill color. The Clark’s Grebe will have a more yellow bill than the Western. More uncommon than the Western, the Clark’s will join into flocks creating a large group of both species much like I observed in the marshlands last fall.

Common birds are too often overlooked. I encourage you to stop at the next flock of grebe and watch. Watch the silly habits of the birds, and see if you can tell the difference between the two species. Getting to know these two birds will undoubtedly bring you as much pleasure as it has brought me.