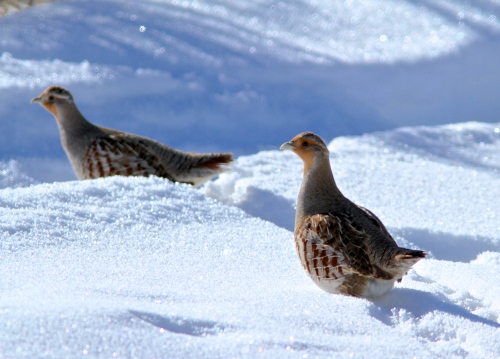 I was out wandering the frozen landscapes of the west the other day. My task to discover the regions wintering eagle population in its entirety all too often warrants views of other creatures that endure the ice and snows of winter. I must be honest and say that I make my best attempts at stifling my urge to digress from my task and take a quick look at those that are other than the eagle. I, all too easily, fail in the exercise. Call it an attention disorder, a lack of conviction, or any other explanation of poor behavior, but I must admit, I am stricken with this ailment.

The other day I came upon, and for the second time, a small group of Gray Partridge. I was giddy. These are a rare sight for me, and as with most small Galliformes, they are quite charismatic. I do feel that I failed in procuring a decent image. No Catchlight, a wildlife photographer’s rookie mistake. I hope Ron does not judge too harshly. I may have failed mainly because both I and the partridge were a bit rushed. Me to get back on the eagle hunt, they to escape the crazed heavily haired human with the imposing lens. We were both on our ways into the world too soon, to meet again, when I do not know.