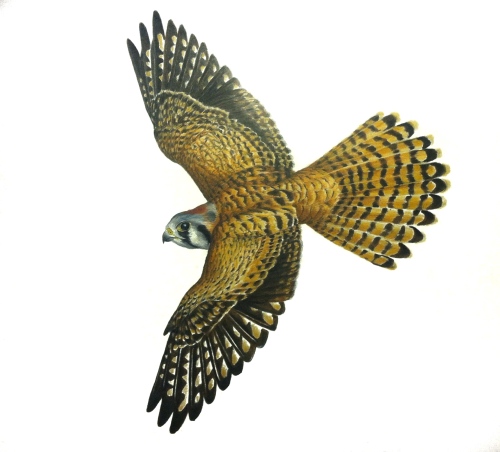 I’ve been on an American Kestrel binge lately, as I’ve illustrated three birds this winter. I’d like to utilize this binge to promote some great work happening concerning this species here in the western U.S. I illustrated the female Kestrel shown above for one of my peers, Alexandra Anderson, who just completed her master’s project studying the wintering habits of this common falcon. Congratulations on a great project well done Allie.

Here in Boise, Idaho, there is no shortage of research being conducted on our local sparverius population. Dr. Julie Heath at Boise State University has been researching this population for the past 15 years. She has multiple students working on various projects detailing the effects of system change on the kestrel, and for good reason. A recent publication from Dr. Heath’s research reports shorter migration distances resulting in an advancement in timing of nesting due to rises in average winter temperatures (Heath et al. 2012). The game is changing for the kestrel in the west, lets just hope we can understand this change, and how we can manage any negative implications.

The Peregrine Fund, also located here in Boise, has a project devoted to American Kestrel conservation. The American Kestrel Partnership is a network program focused on nest box establishment and rehabilitation to help facilitate a future for this colorful bird. I encourage those interested to get involved by first visiting their website here. On the homepage, you’ll see a revolving screen featuring many incredible Kestrel photos, including images by my friend Mia Mcpherson. She takes amazing photographs of kestrels, and more. Take a look at her website as well.

HawkWatch International in Salt Lake City, Utah has a Kestrel Nest box program, which contributes to The Peregrine Fund’s American Kestrel Partnership, with some added angles. I appreciate HWI, as they involve the public through their citizen science program. Their kestrel project is a great place to get involved, and be a part of an important movement to further our understanding and the future of the colorful and charasmatic American Kestrel.