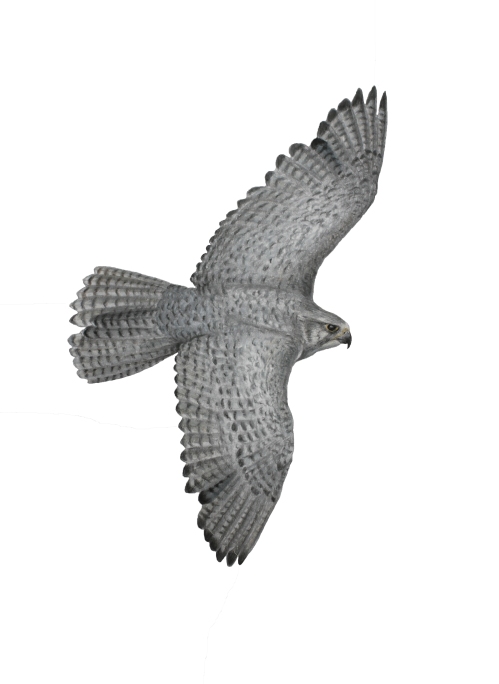 While in Alaska this past summer conducting research on nesting Gyrfalcons – Falco rusticolus, I made many notes and observations concerning the stage of molt for each adult bird that I encountered. I’d like to share a few things that I noticed. I’m still a young student of ornithology, so none of this is new information, just a few interesting things that I noted and count as important information to retain.

First, I was interested to note the difference in stages of molt between male and female Gyrfalcons during the incubation period. The bird I have illustrated above portrays the stage at which most females molt had reached in early to mid May. Males on the other hand had either not initiated molt yet, or had just started. Needless to say, the general trend was that females were farther ahead of males and in some cases were even more advanced than what I have drawn.

Another interesting thing I noted was that this difference in molt stage by sex changed. Once the female began provisioning for nestlings, the females molt slowed as the males caught up.

I set out to illustrate a Gyrfalcon in flight to show some of my observations on molting Gyrfalcons, however creating the digital image of the illustration did not transfer some of the aspects I had hoped it would. One thing I noted concerning the body molt was that the rump was the first to be replaced. All birds in early summer had nice contrasting rumps consisting of fresh feathers. The mantle and scapulars as well as the upper wing coverts had yet to be replaced.

The Gyrfalcons in May were growing in feathers at their initiation points. In Falcons, this is P4 or 5, S4 and 5, the inner tertials, and in the tail the central deck feathers T1. This beginning stage is important for understanding the difference between hawks and falcons, and is another reason I wanted to illustrate a molting falcon

I love studying molt, and in the largest of the falcons it interests me to a great degree. Molt is costly, energetically. When you consider a large species that lives in a harsh climate such as the Arctic, it is remarkable that they complete an entire molt a year, save perhaps a few underwing coverts. Other large avian predators of the region like the Rough-legged Hawk and Golden Eagle do not do this, a fact that makes my respect for the Gyrfalcon grow evermore.

I enjoyed the exercise of drawing this falcon in flight, and adding the aspect of molt to tell a story. I plan to make this a goal of my illustration, to combine creative imagery with context that communicates ideas and facts about the chosen subject. Of course my ability to do so is still a work in progress itself, but as with learning, the process is ultimately satisfying and something I look forward to for the remainder of my life.

4 Comments to “Molting Gyrfalcon in Flight”