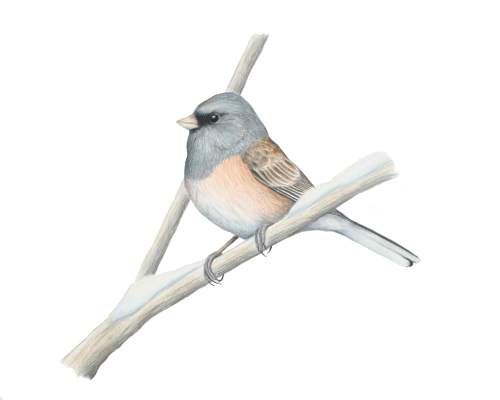 This year I chose a more common and well known winter bird for my annual year-end illustration The Christmas Bird. I chose a Dark-eyed Junco – Junco hyemalis, more colloquially known as a snowbird. The bird is fitting to represent the season, but I thought I’d make a bit of a twist to satisfy the nerds among us. I illustrated the subspecies mearnsi, the Pink-sided Junco. Those in the Rocky Mountain west are familiar with this bird, as it frequents feeders in mixed flocks with other Junco subspecies. It’s always a treat to see the distinctive pale blue-grey hood with a dark mask. I make sure to pay attention to the subspecies composition of Junco flocks here in western Idaho. We have flocks consisting mainly of “Oregon” Juncos, but occasionally we have “Slate-colored”, “Cassiar”, and the “Pink-sided”.

It is a bit strange to think that we are all at that point in the year once again. I certainly had a great year full of many birding adventures (3.5 months in western Alaska), plenty of satisfying illustrations, and loads of study and learning. I hope that others had an equally satisfying year. Here’s to another year of study and learning. Happy Holidays, and Happy New Year.