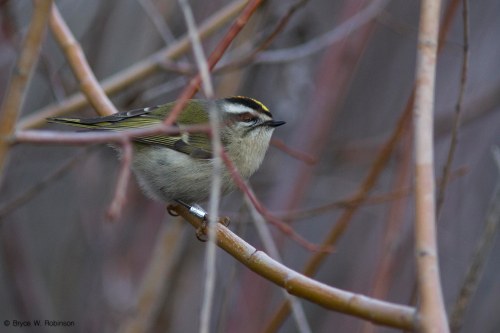 This past fall I helped the Intermountain Bird Observatory band birds on a number of occasions at a site along the Boise River. I’ve returned to the location on occasion throughout the winter to bird, and every time I find a small mixed flock with banded individuals throughout.

The other day I made attempts to photograph banded birds to capture band numbers and identify individuals. Easier said than done when the flocks are busy foraging. I came away with some good photos, but nothing that put together a full sequence or even the last few digits.

It can be said, however, that these birds are most likely the same birds that were banded here in October. The other most plausible explanation is that some were banded at IBO’s other site, only a few miles away on the top of Boise Peak. I’m unfamiliar with the literature on winter movements of the Golden-crowned Kinglet, so I don’t have an idea if holding a small range throughout winter is common for this species. Still, the birds I photograph seem to be staying put which surprises me in some way. Perhaps the inclination of the flock to stay within a small range speaks to the quality and perhaps importance of the habitat provided by this relatively wild portion of Boise’s section of the river.

Time to read, and think some more.