Well, it has happened once again, I’ve lapsed in my blogging. I’ve been through Utah, Nevada, and back to California again. There have been great birds along the way. I’d love to share some of the photos I’ve gathered along the way, but I want to share an experience I had yesterday. It was new and exciting for me, and carries potential for a whole new avenue of learning in my bird study.

I’ve yet to venture into the ocean to bird. I’ve only made it to the coast. Seabirds fascinate me, and I plan to make a pelagic tour soon enough. Until then I am standing on solid ground, watching what I can. I’m not seeing any true seabirds such as the Black-footed Albatross or Wilson’s Storm-petrel, but I am seeing unfamiliar birds passing over the ocean at a distance. My hawk watching instincts have kicked in on a whole new group of birds. 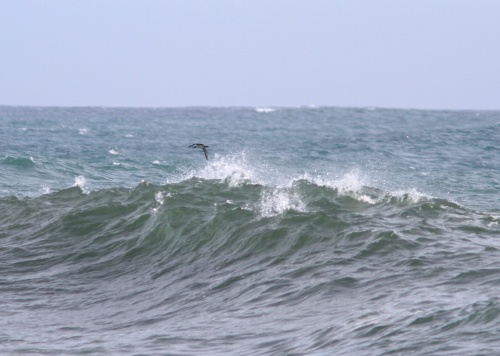 All the training I’ve had with raptors comes into play with passing sea migrants. There are particular field marks to pay attention to, but after enough exposure, I am sure I will be making my ID’s from shape, form, and flight style.

While watching for a few hours yesterday, I saw a massive loon migration. Every few minutes, a group averaging ten birds would come through, low over the ocean. It was a chore to check my field guides and learn what to look for with identifying passing loons. I started getting a handle on separating breeding plumage Pacific from Red-throated and Common, as there are some obvious in flight plumage differences. In the afternoon sun, however, I began to realize that lighting was confusing things.

A field mark for identifying Pacific Loons in flight is two prominent white lines on their scapulars, coupled with a dark throat. It seemed to me that every passing group was a Pacific, even the birds that resembled Red-throated Loons in shape. After some thought, I realized that the harsh sun was likely giving a glare off of the other dark backed loons, making it appear to have the white scapular markings.

There were other passing migrants, and shore dwellers. I had two Whimbrel fly through, a good number of Pigeon Guillemot, and of course many many gulls. I admit, I have not spent the amount of time studying gulls as I should, but I am working on it. What a daunting task. 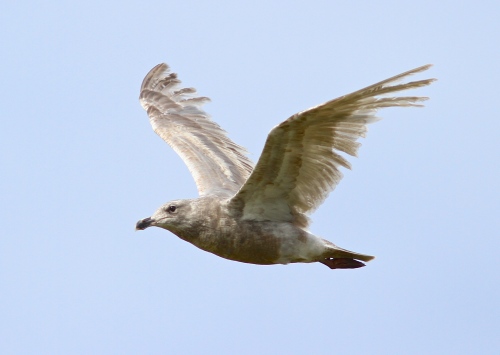 I’ll be interacting with the ocean quite regularly for the next few months. I hope to find the time to share everything interesting and exciting that I come across. And the road continues ever onward.

4 Comments to “Beatnik Birding: Sea Watching on the Pacific Coast”