The Parasitic Jaeger, An Interactive Bird

One of my favorite parts of working on the tundra was experiencing the breeding behaviors of the Parasitic Jaegers, first hand.  In early June, when I first arrived on the tundra, I was impressed by the number of all three of North Americas Jaeger species. Many times, I watched dramatic pursuits of shorebirds, where two jaegers would cooperatively chase and capture their prey. As winged predators such as raptors seem to fascinate me above all else, these hunting forays were captivating. I had heard, but really had no idea the jaeger was such a fierce bird.

When the snow finally melted completely, the Pomarine Jaegers left the area. The large numbers of Long-tailed Jaegers seemed to decrease drastically as well. For some reason, the Parasitic Jaegers stayed, and formed territories. Luckily, one study plot of which I frequented, had a nesting pair of Parasitic Jaegers. I interacted with these birds for the entire season, and I’d like to share some of my encounters. 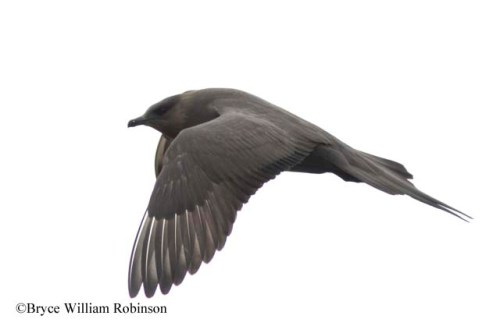 For the first few weeks, every time I walked through the jaeger’s territory, the birds would simply circle, vocalizing occasionally. This mild and cooperative behavior would soon change. In the meantime, it was enjoyable to photograph the birds, and contemplate their different plumages. The bird of which I believe is the male, sexed by behavior, is a solid dark morph. The female, is a very light and unmarked bird, quite unlike her mate. 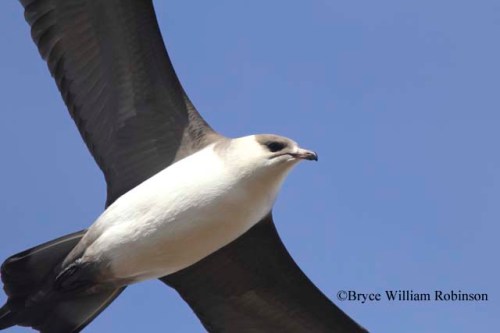 When the birds actually initiated their nest, they became highly interactive creatures. The closer I came to the nest location, the more aggressive the jaegers became. Vocalizing constantly, the birds dove at my head. It was amusing to watch the birds heading straight for my face, and drop their cute little webbed feet. If it were a raptor with serious talons, the game would have been different, but webbed feet were ultimately non-threatening, and only made me giggle. 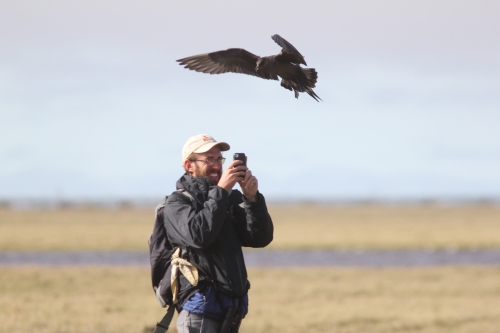 Above is a photo of me, giggling. I’m glad my girlfriend Caitlin was there with the camera to capture my elation. I think the photo shows how much this bird nerd enjoys bothering nesting Jaegers, and how much jaegers dislike bird nerds bothering their nest. In this instance, I was trying to record the experience of having birds swipe at your head. I took videos on multiple occasions, almost every time we walked through the territory, but only once was I smart enough to turn my phone and get a video formatted correctly. Below you can watch the jaegers attack me on a foggy day, and experience one of the many reasons I loved working on the arctic tundra.

4 Comments to “The Parasitic Jaeger, An Interactive Bird”