Thoughts on the Past, Present, and Future of the Snowy Plover in North America

I’m becoming increasingly fascinated with how our changing world may impact the distribution of a given species, either shifting or fragmenting breeding ranges. I have a particular affinity for the family Charadridae , and I’ve found myself paying closer attention to one species in particular, the Snowy Plover – Charadrius nivosus. The Snowy plover occupies a widespread but disjunct breeding range in its western North American population(Figure 1). This range is likely a result of the bird’s need for specific (in turn limited) habitat for breeding. 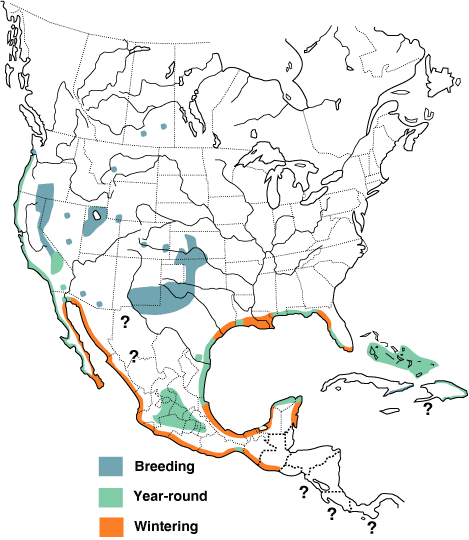 The Snowy Plover is a species that has faced many challenges with the ever increasing human presence. Throughout the bird’s North American breeding range (Figure 1), human impacts have caused a multitude of threats to its ability to reproduce. These threats include but are not limited to environmental contaminants, an increase in nest predators such as Raccoon, Common Raven, Coyote, and Red Fox, all of which have experienced a human-subsidized boost in population numbers in recent decades, and recreation on beaches causing both disturbance and nest destruction. A great discussion of all factors impacting Snowy Plover populations can be found on the Birds of North America species account under the Conservation and Management section.

Multiple organizations are working with state and federal wildlife authorities to augment the negative impacts humanity and its residuals are having on Snowy Plover populations. These organizations include Point Blue Conservation Science, Friends of the Dunes, the National Audubon Society, and many others. The effort is impressive and has seen some success. Still, there is a looming threat on the horizon, the impacts of human induced climatic changes.

What the threats of climate change mean for the Snowy Plover in western North America and across the rest of its range in S. America are still to be determined, but I’d like to emphasize the need to determine and augment these threats as they are occurring. I’ve become aware of a population level analysis that is meant to track the distributional patterns of a given species throughout its yearly cycle (Ruegg et al. 2014). The idea is to identify population structures during the major life events of a species through genetic analysis of individuals at each location; breeding, migration, and non-breeding. Understanding where individuals spend each part of the year holds the power of  identifying where negative impacts are occurring that are driving population declines. This is the big idea behind the banding effort, but this technique provides larger sample size and more power for determining population structures. It’s a huge step in the right direction.

My point is, wouldn’t this be a great tool for assessing changes in populations of the Snowy Plover over its disjunct range as the impacts of climate change become more visible and severe? The answer is yes, and we ought to begin the effort…