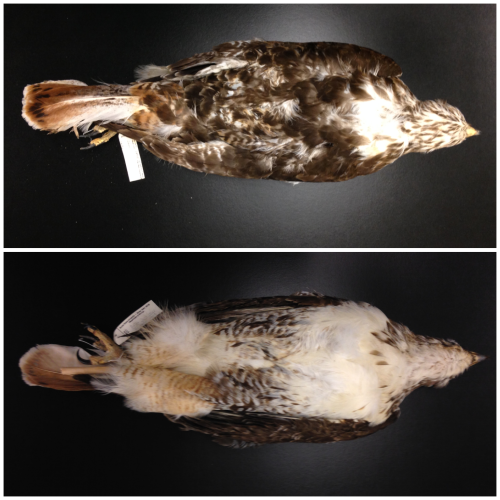 Here are a few things I found interesting when I first found the bird:

I’m a bit disappointed that the tail wasn’t spread at preparation, so it was difficult to get a full glimpse of each feather. Additionally, there was no informative data accompanying the specimen, apart from a tag that read “Red-tailed Hawk”. As I’ve become more familiar with the art of museum preparation and the usefulness of specimens in research, I’ve become more aware of how important information is to put a specimen into context.

Even though the data is lacking, I’m really appreciative of the opportunity to look at this bird and take some photos. It’s a really interesting light morph Harlan’s that deserves some recognition. It made my day.

For some more insight into variability in light morph Harlan’s, check out this article by Jerry Liguori: