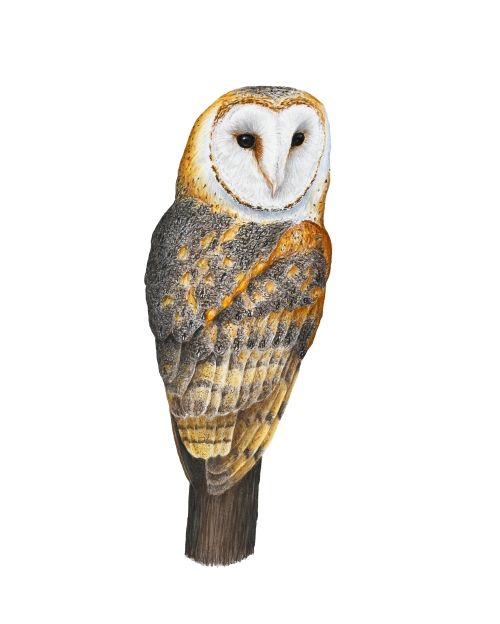 To begin, I should have illustrated the frontside of this Barn Owl to illustrate the concept I’m about to present. I did not, however, have “spottiness” in mind when I began the illustration, so I decided to illustrate the backside. I find the back patterning mesmerizing.

So, for the concept you’ll just have to imagine the frontside of this bird, being spotted throughout.

Studies supporting this theory have generally focused on males, and for good reason. Males tend to be the showier sex. But, what about species where females exhibit unique markings?

Barn Owls are one species where the female shows more markings (spots) than males. Additionally, studies support that female Barn Owls are not the choosers in breeding, as per usual. Because of these reasons, Roulin et al. (2000) decided to test the theory that heavier spotted females were of higher quality (tease out the mechanisms of spottiness). They hypothesized that females with more spots also had higher levels of specific antibodies important for parasite resistance.

Their study looked into immunocompetence of offspring. They found support for the idea that heavier spottiness communicates immunocompetence, but also may be a “heritable signal of parasite resistance”. This is important for Barn Owls, as they nest in cavities and tight spaces. I remember a few weeks ago I went with a peer, Tempe, to check on a Barn Owl nest for her Master’s Project. The box held four owls (lower than normal), and was full of feces and dead animal remains. In such situations, parasites and all sorts of things may run rampant. Having higher resistance then becomes advantageous, and ways of communicating such resistance will then be selected for and prevail. Makes sense (eureka?).