Figure. 1. Head illustrations of Melospiza melodia montana (left) and kenaiensis (right). Note the difference in bill morphology, where kenaiensis has a long pointed bill, representative of four largely year-round resident subspecies of southern Alaska, which range from south central west to the aleutians (including, kenaiensis, insignis, sanaka, and maxima).

Spending time on the Kenai Peninsula meant that I’d get exposure to one group of Alaska’s excellent Song Sparrows. The Song Sparrow breeds along the southern coast of Alaska, all the way to the Aleutians. More interesting is that there is clinal change in bill morphology and body size, where the largest of the Song Sparrows breed in the far west of its range, and has a dramatically different bill shape than what is generally seen on a sparrow (Pruett and Winker 2010). The Song Sparrows of central Alaska to the Aleutians have long, thin bills. I illustrated the difference between montana, a subspecies that breeds in the intermountain west region of the continent, and kenaiensis, the subspecies I encountered in Homer, Alaska (Fig. 1).

There have been no empirically tested explanations for the difference in bill size, so far as I can find. In discussing the issue with my friend Luke about the non-migratory habits of these birds and the habitat they occupy during winter, the best hypothesis I can come up with is the selective pressures of winter foraging, which has been shown to be the evolutionary driver in bill morphology in other species (Francis and Guralnick 2010). The birds habitat is intertidal zones where they forage on mollusks and invertebrates, instead of the granivorous diet of the other Song Sparrow subspecies.

The birds in Homer differed from the Song Sparrows I’m familiar with in body plumage as well. They were a cold gray, with subdued markings, different from the high contrast birds of the montana group. 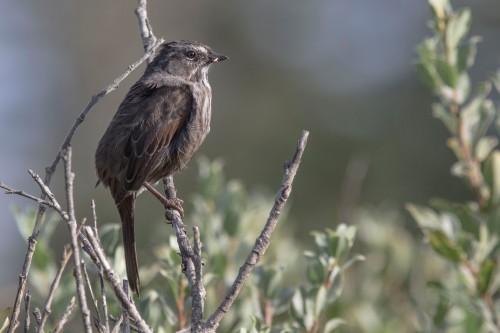 I illustrated the heads to compare bill shape, but what I’d really like to do is illustrate the full body of all of the Alaska subspecies with montana for reference, although merrilli, relatively close in size and appearance to montana, breeds in the far south east of the state and may provide the context just the same.

Song Sparrows of Alaska, what an excellent example of phenotypic divergence and the results of evolutionary selective pressures, whatever they may be in this instance.