Tufted Puffin (Fratercula cirrhata) with a bill full of fish to take back to its burrow to feed young. Kachemak Bay, Alaska.

I had the pleasure of taking a few days to visit Homer, Alaska and get in some much needed birding on the southcentral Alaskan coast. I was after Alaska state bird additions, as well as a few potential lifers. I needed to get on a boat so I scheduled a trip with Bay Excursions for a morning around the bay.

I was after both Kittlitz’s Murrelet (Brachyramphus brevirostris) and Red-faced Cormorant (Phalocrocorax urile). Karl, who leads the trip and captains the boat, mentioned concern that it was too late for Kittlitz’s and that the cormorants were scarce in the bay this year. With the poor forecast, I still thought it equitable to make the trip and gain experience with other birds. Anytime on a boat, in good weather, is equitable.

Homer is great. There are plenty of camping spots right on the spit. I camped on the shore, woke up in the morning, and had a five minute walk to the boat ramp where I boarded and we set off. Joining me were the expected crew of older folks with cameras and an excitement for seeing wildlife. But they weren’t necessarily birders, so I knew that I was outnumbered and would have to accept that we wouldn’t be spending much time studying murrelet behavior, shearwater ID, or following any curiosities I’d have. Such is birding on a boat I suppose.

Marbled Murrelet (Brachyramphus marmoratus). Paler individual on the left cause pause in hopes of it being a Kittlitz’s, but no luck. Kachemak Bay, Alaska.

Immediately out of the harbor we began to see murrelets. I checked every bird, and for a while Karl paused to give the folks on the boat good looks at the endearing birds. After a short time the group grew tired of the murrelets so we unfortunately cruised by too many groups that I wanted to spend a little more time with in hopes of a random Kittlitz’s popping up amongst the marbled.

I was able to get the boat stopped for some shearwaters. I caught a handful of birds cruising about 1 km west, and once the boat had stopped a few had circled us and I was able to ID them as Sooty Shearwater (Ardenna grisea). We spotted one set on the water that happened to be a Short-tailed Shearwater (Ardenna tenuirostris). With my limited experience observing procellariids on the water I felt satisfied with the short encounter. 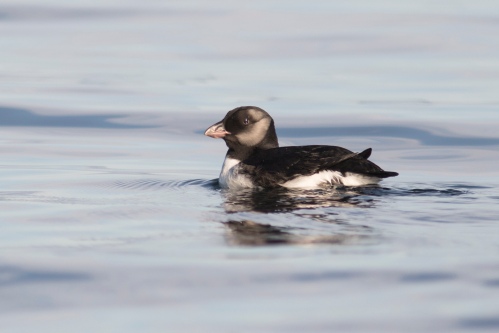 One of the neatest birds we found on the water was a juvenile Horned Puffin. It’s bill was extremely small, nothing like the ornate bill of a matured bird.

Some of the strangest birds to encounter from the boat were Song Sparrows on every island we passed. I also caught a Steller’s Jay in the air above a larger island with some conifers. Island living passerines, neat to see.

Overall I was happy with the few hours on the water. I do think that the trip deserves more time, as I could have likely spent another few hours on the bay watching alcids and looking for a Red-faced Cormorant. I also would have liked to venture a bit farther out of the bay to encounter more shearwaters, and whatever else we might have happened upon farther out to sea. In the end I missed my two hopefuls, but the time on the water was excellent. I’ll be back again when the time is right for the missed species.