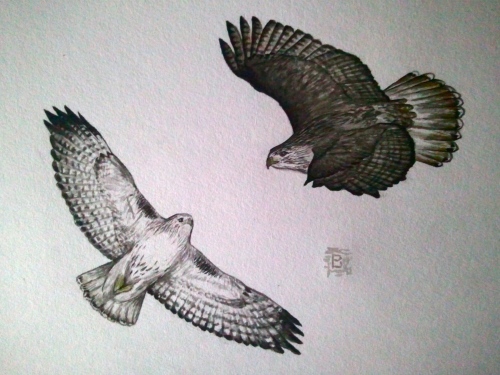 Embracing my extreme fixation with Harlan’s of late, I decided to devote my free time today to illustrating a bird I am very unfamiliar with. I have only seen one light morph Harlan’s Hawk in the field, and I see that as a problem. To learn the bird better, I referenced  an article written by Jerry Liguori and Brian Sullivan, detailing the plumage characteristics of Harlan’s Hawks in detail. An extension of the article provided me with numerous photographs to utilize in putting together my interpretation of a light morph bird.

Illustrating raptors on the wing is a test for me. Proportion is perhaps the most important aspect to creating a natural and realistic looking bird. Hawks in the air create an image of deep detail, and it becomes a challenge to lay out the detail and form to present a realistic flying bird. I painted two birds, which are actually meant to be one bird, shown at two angles common to the hawk watcher.

2 Comments to “Illustrating Light Morph Harlan’s on the Wing”