The Benefits of Photography for Mapping Avian Movements 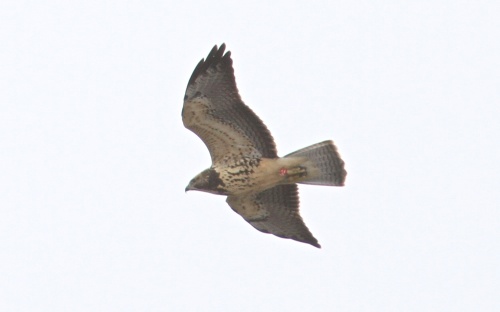 Above is a photo of an immature light morph Swainson’s Hawk that I took on the 7th of September, 2013 at the Goshutes Raptor Migration Sight in eastern Nevada. Notice the red band on the birds left leg. I’ve cropped the image a great deal, but below I’ve enlarged the section of the image to show the band in greater detail. At this resolution, the image becomes pixelated, which is unfortunate.

I contacted the BBL in hopes of tracking down someone that might recognize the band. I am so very grateful for their organization, as they quickly sent out emails asking those they have permitted for color banding SWHA. Within a day or two, I had a hit.

A man name Chris Briggs contacted me and gave his firm assurance that this bird was a bird he had banded earlier this year as a nestling. He mentioned his use of special characters such as the obvious < symbol on this birds color band. He thought that the other character on the right was either an 8 or a 9. One cannot be too certain, but he did assure me that the band was certainly his.

As the birds age was apparent from its plumage, I was really interested in where the bird originated. Chris informed me that this bird was banded as a nestling near Macdoel, California, a town near the northern border just south of Klamath Falls, OR. He sent me the photo below.

How exciting! It is nearly certain that this bird is the same bird as the bird I photographed in Nevada. I am so thankful that the organization exists such that a photographer can capture a photo of a bird with a band, and if the band is legible, can track that very same bird to the place that it was banded, without ever trapping the bird. The invasiveness of trapping hawks is curbed with the advent of the camera! Revolutionary….

Well, my question is then why are we as raptor researchers, or ornithologists as a whole not employing this technique more often? Some may state the added detriment of more bands is not worth while, and I do not discount this contention. However, how much more detrimental will one color band be to an already banded raptor? It is a discussion worth having, because with the amount of folks armed with cameras today, we could find ourselves with a lot more re-sight records, and a better understanding of spatial ecology in particular species.

I’d like to include another recent instance for emphasis. A few months ago, my friend and obscenely talented photographer Ron Dudley photographed a young Prairie Falcon in Montana. It happened to have a color band, and he was able to track down where the bird was banded. As it happened, his bird was also from California. You can read the story in detail on his blog.

How peculiar, this bird that fledged from its nest, and for whatever reason did not disperse directly south, but in a somewhat north east direction. North east enough that it passed by the Goshutes in early September on its way south. In my own personal study, I’ve learned that this non southward directionality of post fledging dispersal is something many people tracking birds of prey are seeing. The old north to south paradigm is becoming a bit more complicated than initially thought, and young birds seen traveling south on their fall migration, aren’t necessarily birds fledged from the north.

14 Comments to “The Benefits of Photography for Mapping Avian Movements”