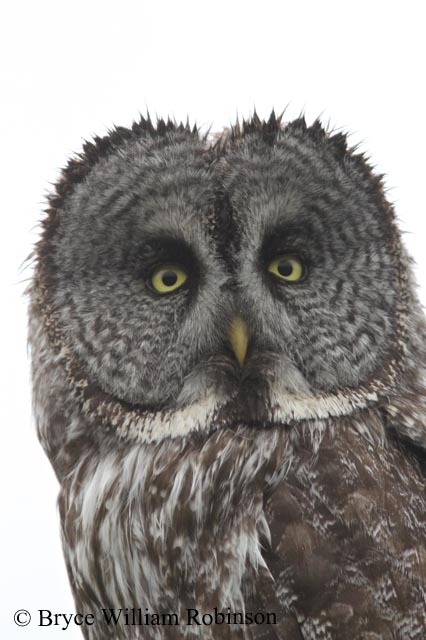 I still have a massive collection of experiences to share from the past year of my beatnik travels across the continent in search of birds. At the top of the list is seeing my first Great Grey Owl in the Yukon Terrritory.

Caitlin Davis and I stopped in a small town, a village really, called Haines Junction, to meet with our friend Bill Clark, who was in the Yukon chasing and banding Harlan’s Hawks. Bill and I share a passion for the Harlan’s, and I couldn’t pass up the opportunity to spend the day with him chasing the enigmatic hawk. In the morning we set out with Bill and a young graduate student, Megan Mayo, who is doing her thesis on the genetics of pigmentation (broad description) in the Red-tailed Hawk. It was a very damp day, raining regularly, but the Harlan’s were plentiful.

While Traveling down the highway, scanning for Harlan’s, Megan spotted a large dark creature perched on a snag. Indeed the large figure was the Great Grey Owl, watching the roadside in the rain, hoping for a meal.

This Great Grey was my first, and Caitlin’s first, and Megan’s first as well. The bird had six eyes entranced on its behaviors. While Megan and Caitlin approached the owl to experience it in more detail, I set up my video equipment and chatted with Bill. He had seen many in his day of course, but I could tell the bird still brought him some joy. I was rushing as the girls approached the bird. I felt some anxiety at the possibility of setting up and having the bird retreat before I could take a clip. Bill reassured me that the bird wouldn’t mind the intrusion, as in his experience, they are very tame in temperament. Of course he was correct. The bird tolerated our presence.

Both Caitlin and I took many photos. I’d love to share everything, but at the moment I’ve settle on the three. Notice the feather structure of the bird. It is fascinating, as the rain dampened the birds feathers, creating incredible textures. Caitlin’s photo shows the birds face at an angle that displays the deep inset eyes, showing the extent of which the birds mass is comprised of feathers. I really can’t describe what it was like to be so close to such a creature. There is a reason people talk about this bird as if it were the top of their list, the bird they seek most. I encourage bird lovers to make the Great Grey Owl a priority. It is one of the birds that lives up to the hype, one that will surely not let you down.