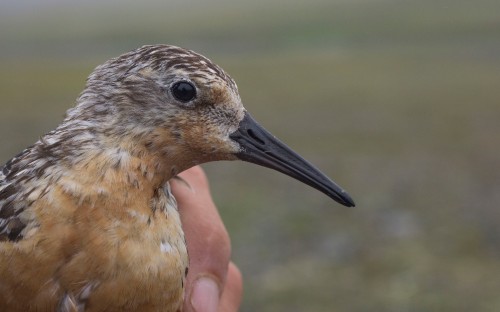 On 1 July I travelled to Nome, Alaska to work on roselaari Red Knot research. I’ve spent the last month working on the project, and I’ve learned a great deal. The U.S. Fish & Wildlife Service has been conducting research on breeding Red Knots for the last seven years on ridge lines outside of Nome. They’ve focused on reproductive monitoring, marking and resighting birds, and determining the timing of arrival and departure on their breeding grounds. The effort has also provided collaboration with folks studying this population on their migratory and wintering grounds. You can read more about the connectivity study here.

I feel fortunate to have joined the work, especially considering that the collaborative study effort on this circumpolar breeding species is growing. This year a researcher from the Royal Netherlands Institute for Sea Research (NIOZ) joined the USFWS study effort in Alaska. Jan van Gils Ph.D., whose work was recently featured as the cover article in Science Magazine, joined Jim Johnson and Lucas DeCicco and the USFWS crew to investigate the potential impacts that trophic mismatch may pose on the breeding roselaari Red Knot. It was excellent spending time with Jan, as we discussed many ideas concerning climate change impacts on Red Knots and Arctic life alike.

Jan van Gils et al. 2016 as featured on the cover of Science Magazine.

There is then the potential that the tight timing of arrival and breeding of these birds may no longer coincide with the peak abundance of prey populations, something that has already been shown in many species that breed in the Arctic. Thus, understanding fully the timing of their breeding on the ridge is essential for understanding future climate change impacts. 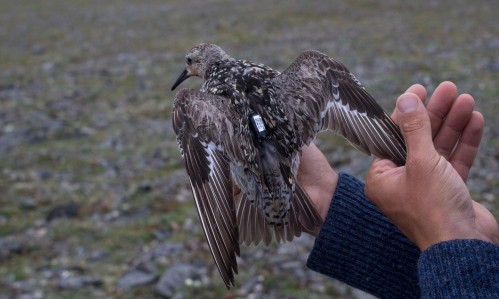 To better understand the latter portion of the timing of Red Knot breeding on the Alaskan ridges, Jim and Luke began deploying pinpoint GPS dataloggers on adults to determine when they depart the breeding grounds, the time they spend on migratory stop over sites, and the length of migration, . This year we deployed units that have already started returning data on migratory locations and duration. It will be exciting to see how the birds differ, or don’t.

Luke checks out the placement of the pinpoint GPS unit on this adult roselaari Red Knot.

I had an excellent month on the peninsula. Apart from learning a great deal about these birds and their breeding ecology, I gained more exposure to excellent bird life in one of my favorite ecosystems. At the end of the season Luke and I shifted our focus to the coastal areas to attempt trapping of staging Juvenile Red Knots for more pinpoint deployment. I’ll highlight the rewards from the effort in my next post. In the end the Red Knot work was the cessation of an excellent summer of Alaskan bird study.

The season was successful thanks to a great field crew apart from Jim, Luke, and myself: Nick Hajdukovich who handled the lead for the first part of the season before Lucas joined in the field, Sarah Godin, Bethany, and Charlie and Linnaea Wright.