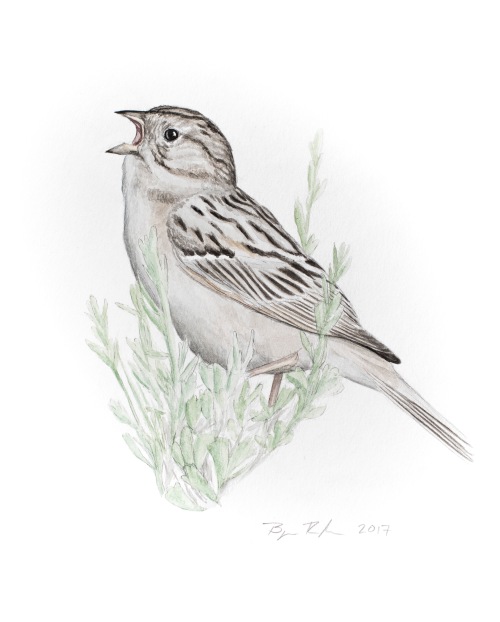 One of the best parts of spring in the Sagebrush landscape of western North America are it’s singing inhabitants. The Brewer’s Sparrow may be my favorite, because of its subdued but beautiful plumage and distinct trill song. On a spring morning at sunrise, one can walk through a healthy stand of sagebrush, songs erupting all around, as multiple males sing atop their sagebrush posts.

Brewer’s Sparrows have a distinct buzzing song, that sounds superficially simple and distinct. But, their songs can be variable and have multiple types as described in Rich (2002). See the figure below to gain a familiarity with the variability.

Song types of the Brewer’s Sparrow, long (A) and short (B). Figure taken from Birds of North America Online, adapted from Rich (2002).

Rich (2002) found that the variability seen above seems to follow no geographic trend or isolation, nor does there seem to be any song sharing among neighbors. High turnover among territories and potential for natal dispersal could limit the development of local dialects, etc. Interesting stuff…

If you’re unfamiliar with the sound of a singing Brewer’s Sparrow, be sure to visit Xeno-Canto and explore.

Here is a short clip of a singing Brewer’s Sparrow in Idaho that I took through my Zeiss scope. The song is barely audible because of how distant I was from the singing bird: